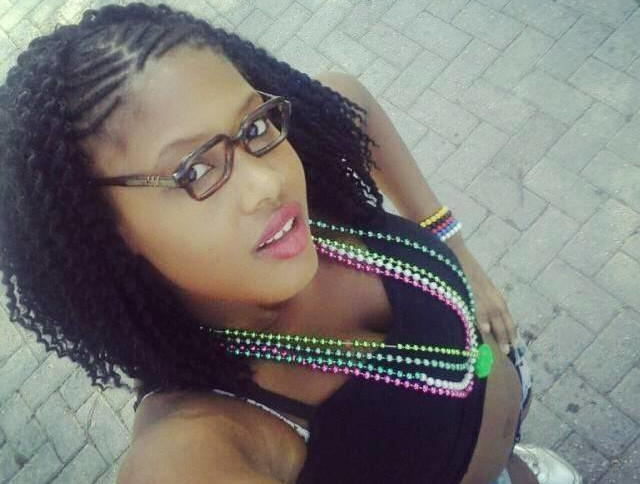 The inspired Jeansaitil Yvena has been painting powerful images for five years and has been studying at the New Vision Art School in Port-o-Prince for four years. She wants to go on a study trip soon, but like her fellow students from Haiti, she has no budget.

Traditional Haitian vodou art served as an example of Yvena’s powerful colorful style. Yvena: “My examples are Levoy Exile, Robert Saint-Brice, Louisiane Saint-Fleur, Pierre-Louis Prospère and her partner Lesly Pierre Paul.” Although the Haitian Vodou is an important source of inspiration, Yvena does not call herself religious, although her family is. “I am inspired by nature, vodou and occult symbols, but I have no contact with shamans when I paint. I just think of loa (spirits) like Erzulie Freda, the loa of love among other things. You could say I have a special bond with Erzulie Freda, but I haven’t painted a painting about Erzulie Freda yet. I hope to do this in the future.”

Spiritual Egyptian themes appear regularly in her work. Yvena: “I didn’t have a special connection with Egypt, but I like their stories. I painted 3 Women of Egypt. I also made a painting with a pyramid and an eye. It represents the queen of Egypt in her world this woman wanted to show the strength of the Egyptian people. The eye represents the clairvoyance of spirits.”

That Jeansaintil Yvena is a woman of the world is apparent from the symbolism she uses in her paintings in her own way. Its interpretation is loosely related to symbols from Freemasonry and Greek mythology.

On the painting 3 women of Egypt you see a life-size symbol from Freemasonry. Yvena does not specifically refer to this symbol as a Freemason symbol, but we see a clear similarity here. Here we see the all-seeing eye of God in the Star of David in the midst of a square and compass. The compass and the square symbolize spiritual and personal development within Freemasonry. God is here compared to the chief architect. Freemasonry or (franc-)masonry is an internationally spread and regionally structured society of people who strive for spiritual and moral upliftment, mutual appreciation and mutual help. There is also a Masonic Lodge in Port-au-Prince, where Yvena comes from. Originally, Freemasonry was only open to men, but today there are also mixed lodges and lodges for women only.

In the painting The Queen of Egypt we see an eye in a pyramid. One of the most controversial symbols of the moment is the eye in the pyramid. Some people see it as evil because it is depicted on the US dollar bills. They attribute the symbol to the so-called Illuminati, a small powerful group of empires, who are out to conquer, oppress and exploit the world with satanistic rituals. Jeansaintil Yvena does not refer to the illumination, but refers to the fascinating stories from ancient Egypt. The original meaning of the eye in the pyramid is the all-seeing eye. In the 17th and 18th centuries the image developed in Europe and North America from the Egyptian eye of Horus. The motif symbolizes an eye that sees all or the eye of God, and is often associated with Freemasonry.

The queen of Egypt has hair like serpents. Jeansaintil Yvena is mysteriously silent when I ask her if this hairstyle is inspired by the monster Medusa from Greek mythology. The Goddess Athena had turned Medusa’s hair into snakes, but the reasons for this are different. According to one story, Medusa was too beautiful and Athena did not want people to praise Medusa for her beauty. Another reason was that the god Poseidon had raped Medusa in the temple of Athena and that Medusa was also punished with a snake haircut on top of that. Besides, everyone would petrify at the sight of Medusa. She became a monster, which was eventually beheaded by the hero Perseus. He presented her head to Athena, who placed it on her shield to petrify enemies.

24-year-old Yvena is also a woman with specific plans for the future: “My ambitions lie in the art world. I want to exhibit my paintings in many places in the world. I would like to become known worldwide and travel a lot to visit museums and art galleries, especially in European countries. Yvena is already busy at work: “I participated in exhibitions in the United States at the This Is It Gallery. Here I sold the painting 3 Women of Egypt. In addition, I participated in the FOKAL National Carthography project, it was perfect for me.” The work of Jeansaintil Yvena can be ordered via the Facebook page of the New Vision Art School.

Yvena tells: “But first I want to go on a study trip with my classmates in July. I want to see the artworks of other countries with my own eyes to make a difference. I want to see very unique works of art in the art galleries such as the Bolos Gallery and in the city of Las Americas and Punta Cana. There I can meet other artists to learn their technique, because I think it can help improve my style and create even more beautiful paintings. I also look forward to visiting the most beautiful places in Santo Domingo, such as Punta Cana and Bavaro. The students of the New Vision Art School themselves have no money to travel, so participate in the crowdfunding: