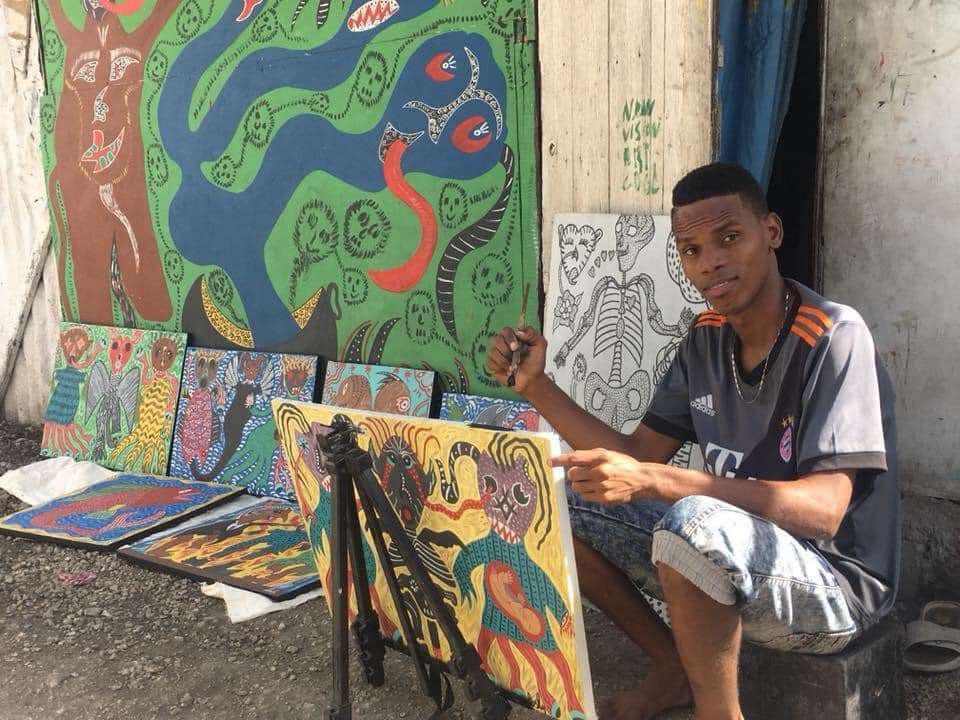 Lesly Pierre Paul makes striking paintings with themes from Haitian Vodou. Vodou sounds like black magic to western people, and you’d better stay away from it. But the deeper meaning of Vodou for Haitians is loving rather than mean.Haitian Vodou is a variant of African shamanism. During colonial times, the enslaved Africans took their gods and loas (spiritual guides) with them, who assisted them in their sinister horror in the Americas. Vodou and other variants of voodoo generally have a horror image in the western world. This image is reflected, for example, in the James Bond film Live and Let Die and the American Horror Story series. Here, Voodoo ghosts like skeletons instill fear and threaten the main characters with black magic. But the spiritual guides of the Haitian Vodou have no intention of sowing fear and destruction. They are there to support the living in their healing, financial situation and relationships.

In colonial times, the European colonialists did not tolerate African mythology, as it was said to be contrary to the Christian faith. In order to be able to continue their faith of their motherland, the new African-Americans integrated it with images from Christianity.

A good example is Papa Loko, patron of healers, plants and trees in the Vodou religion. Haitian tradition considers him a Vodou priest. Papa Loko and his wife are therefore always invoked at the kanzo initiation rites of future priests. Since colonial times, in order to honor Papa Loko, he has been depicted as Saint Joseph with baby Jesus on his arm. Papa Loko is still regarded as the counterpart of Saint Joseph and he is considered a spiritual father figure for all children and people who seek fatherly support.

After 1804, when Haiti broke away from French Colonialism, the artists were given the freedom to depict their loas differently. However, Haitian Vodou has never banned and still embraces Christian influences. For example, the feast day of Papa Loko is celebrated at the same time as the feast day of Saint Joseph on March 19. There is an enthusiastic group of young artists in Haiti who depict the vodou loas with new forms.

Lesly Pierre Paul (30) makes colorful paintings that make a cheerful impression from a distance. But when you take a closer look at the images, you can still see some ‘eerie’ elements, such as skeletons and ‘monstrous’ shapes, by Western standards. Pierrepaul explains: “I like to paint the skeletons based on the Vodou tradition and I have often painted barefoot figures sometimes depicting Baron Samedi, Papa Legba, Grann Brigitte and other loas.”

A good example of this is this acrylic painting from 2021. It seems to be a cross between Baron Samedi, the loa of the cemeteries and Papa Loko. In the image we see two skeletons above a figure with a top hat decorated with skulls. But on the figure’s chest we also see a snake and a mandala with a vèvè, the Vodou symbols of Papa Loko. Pierre Paul has depicted Papa Loko in his universe here and says about this: “The skeletons are witnesses. Sometimes I paint the loa in my own style.”

Pierre Paul says he is not religious and neither is his family: “But we always remain connected to our Vodou culture. I didn’t interact with shamans when I painted loas, I just thought about ghosts like Baron or Legba and another time I paint a theme from the news, like Covid19. Nature inspires me, Vodou and sometimes esoteric and occult symbols, as I also paint for mystical books such as Pillars seeds of Ares.”

Lesly Pierre Paul is self-taught and developed his unique style: “I didn’t have the chance to go to an art school, but I learned from other artists, by hanging out with them. I grew up in an artistic neighborhood. Before painting six years ago, I was a sculptor. In 2009 I made sculptures in collaboration with Milord and other young artists from the Grand Rue (Boulvard Jean Jacques Dessalines in Port-au-Prince).“ Great examples who inspired Pierre Paul are the Haitian Stevenson Magloire, Mario Benjamin and the foreign artists Basquiat , Picasso and Pascal Giacomini.

Pierre Paul works with new promising artists and has been teaching at the New Vision Art School in Port-au-Prince since 2016. Pierre Paul: “I teach painting to children and young people in my community and I would like to teach them about recycled art in the future.” He likes to put young promising talent in the spotlight on his Instagram (@Leslycollection27) and Facebook account.

“I also collect work from our young artists.” says Pierre Paul enthusiastically. “I am very proud of Wendy, because he paints with love and patience. He has been a student of mine since 2016 and he always respects the basic principles of the lines and color mixtures. A good example of this is his painting “Marassa”. Here he depicts Marassa in the form of a mermaid and placed the vèvè (spiritual symbol) of Haiti at the top right and the sun at the left. Marassa are powerful twins in Haitian mythology, with an influence superior to that of the loa. This one can do good as well as evil, because the twins are erratic. The Marassa twins rule the human stomach and during meals the twins must be honored. It is customary for sacrifices to be made to the Marassa.”

The New Vision Art School in Port-au-Prince wants to give talented young people a chance to develop as artists. And especially young people, who do not come from a wealthy family. Haiti is a country that has been struggling with poverty for a long time and more financial support is needed to provide good education. For example, the school wants to organize a study trip for eight students to Santo Domingo in the near future. As a teacher, Lesly Pierre Paul wants to finance the costs of transport, accommodation and excursions through crowdfunding. The entire trip for eight accompanied students will cost approximately $2500. “The students deserve this opportunity and we consider any small donation very welcome!” says Pierre-Paul. Please click on the picture below for more information.