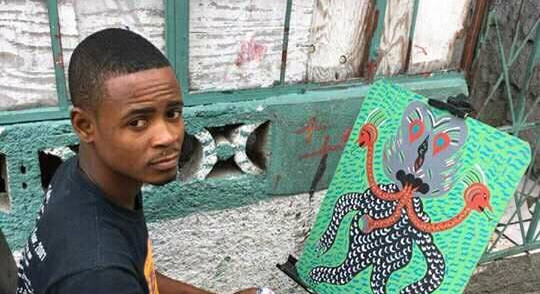 Art student Jeffry Joseph senses the presence of Grann Brigitte, who swears at her pepper potion. Joseph is not religious, but he talks to ghosts in his dream, which he then paints.

“I started painting in 2016 and I am one of the older students of the art school New vision.” tells Joseph. Like them, he is enamored with the work of his teacher Lesly Pierre Paul and his fellow student Shatty (Sanon Jeanwildert). “But my ambitions are to make a difference with other artists and to make my work known around the world like Jean Michel Basquiat.”

Jean Michel Basquiat is also mentioned by his fellow students and their teacher as one of their great examples. The flamboyant artist Basquiat lived in New York at the end of the last century. He came from a dysfunctional family with a Puerto Rican mother and a Haitian father. His mother was mentally unstable and father physically abusive, so young Basquiat ran away from home and lived for a while as a graffiti-squirting bum. His talent was discovered and he became one of the most famous and wealthy artists of the 1980s.

The latter part of his life was about sex, drugs and rock and roll and unfortunately he had too little control over his drug use, which ultimately proved fatal. But in the eyes of the Haitian artists, he was THE African-American who had made it in the usually white-dominated art world. However, little of Basquiat’s wild expressionist style is reflected in the work of the art students of the New Vision Art School. (Personally, I like the work of these young Haitian artists more than Basquiat’s work, but that’s a matter of taste, of course.)

Basquiat also did not often paint loas, or ghosts. But occasionally Baron Samedi returned to his work as in Irony of a Negro Policeman. In contrast, in Joseph’s work, loas almost always occur. “I am not religious and I have no contact with shamans.” says Joseph. “But there are ghosts in my dreams that seek contact with me. I had a special conversation with the ghosts Papa Legba and Baron Samedi. Papa legba is a loa (spirit) of vodou, a religion that originated in the ancient kingdom of Dahomey (Benin).”

This year Joseph painted Maman aka Grann (Grandma) Brigitte. Joseph explains: “Ghosts like Grann Brigitte have special meaning to me. I feel her presence when I paint her. Grann Brigitte is a guardian spirit of the dead, wife of Baron Samedi. She drinks pepper juice and is symbolized by a black chicken. Like Baron and the Guédés ghost family, she uses obscene language. She protects tombstones and cemeteries, provided they are appropriately arranged with crosses. As a vodou spirit from the New World, Maman Brigitte likely descended from the ancestral practices of vodou.

Like his fellow students, Jeffry Joseph plans to take a field trip this summer to visit a number of art galleries in the Dominican Republic. “I want to see the difference between their painting style and mine. So that I can learn more from it than I learned from Lesly Pierre Paul. After that I would like to visit some art galleries and museums in America and Europe so that I can get some other inspiration. When you can see the work of others with your own eyes, it is of course much better and more beautiful than from pictures.

But Jeffry Joseph and his fellow students cannot go on a study trip without your help. So support the crowdfunding. Many thanks in advance!