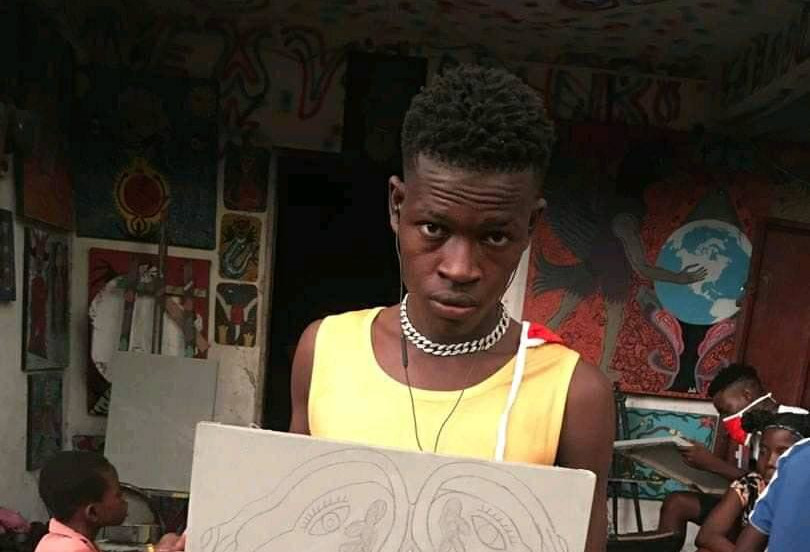 Jean Wilgens from Port-au-Prince can’t wait to leave for Santo Domingo. Like his fellow students, he has no money to pay for this excursion, but he likes to tell his sponsors about himself and his passion for voodoo art. (Lees het artikel in het Nederlands.)

The 21-year-old art student from Port-au-Prince wants to go on a study trip in July: “I’m going to visit some art galleries in Santo Domingo to study the differences between their painting style and mine. Maybe it can help me in my artistic process, after what Lesly taught us. It is ideal for me to see the techniques of the Dominican artists. In addition, I am looking forward to visiting the monumental buildings on the Conde in Santo Domingo, because it is much more beautiful in real life than at the pictures.” he says enthusiastically.

Wilgens started painting in 2016 and is in his fourth year of the New Vision art academy. He has not yet collaborated with an exhibition, but would like to participate in a traveling exhibition.” I joined the FOKAL National Mapping Project. It was cool because it was my first time working in an art project. My ambition is to make a difference and make my art known around the world. I would also like to visit some art galleries and museums in Europe and America.”

Like his teacher Lesly Pierre Paul, Jean Wilgens paints as in the voodoo tradition with Veves, graceful symbols for the Loas (guardian spirits) and the loas themselves. “Lesly is my great example in the art world. It is Voodoo and nature from Master Lesly’s work that inspires me to create beautiful works of art.

Wilgens says that he is not religious, but his family is religious: “I prefer to say that I am Vodou. I don’t interact with shamans when I paint, but I get my inspiration from my dreams. This is where I make contact with the loas.” Wilgens explains. “Ghosts like Papa Legba have a special meaning to me, I always feel their presence when I paint a canvas and they protect me a lot. I also feel a special bond with Erzulie Dantor and Freda.

In the Vodou there are hundreds of different loas (spiritual invisible guides) and one of the most important is Papa Legba. When a Vodou priest wants to ask one of the loas an important question, he must first ask permission from Papa Legba. Papa Legba can then open the door to the other loa for him. Associated with the crossroads, he serves as an intermediary between man and the spirit world. Papa Legba speaks all the languages of the world. He has his origins in Africa, where he is sometimes seen as a fertility god or an impostor.

Papa Legba does expect payment in return for his help. Typical offerings include sweets, such as chocolate and other candies, alcohol – especially dark rum, and pipe tobacco or cigars. In the American Horror Story series, Papa Legba is depicted as a man in black with a skull painted on his face and a black top hat with skulls. But in the Haitian tradition, Papa Legba is an older man, has no makeup, wears a straw hat. In Haiti, Baron Samedi, the loa of the cemeteries, has a skull and wears a black suit with a top hat.

Over time, African Vodou mixed with Catholicism in the Americas and Legba was associated with several saints, including Peter, Anthony, and Lazarus.

Erzulie Freda and Dantor are sisters. Fréda Dahomey, is the Haitian African spirit of love, beauty, jewelry, dance, luxury and flowers. She wears three wedding rings, one for each husband – Damballa, Agwe and Ogoun. Her symbol is a heart, her colors are pink, blue, white and gold. She is often depicted as a baby in the arms of her older sister Dantor. You can recognize Dantor by the two scars she sustained during a fight with Freda for Ogoun’s love. Like Papa Legba, the Erzulie sisters also expect sacrifices from those who ask them for help during rituals. For Dantor these are créme de cacáo, gold rings, Agua de Florida or a wild pig. Freda likes jewelry, perfume, sweet cakes and liqueurs.

You can order the artworks of Jean Wilgens via his facebook page or via the page of the New Vision Art Academy.

Support the crowdfunding and/or share it via your social media:

Read more articles about Haiti and the crowdfunding.