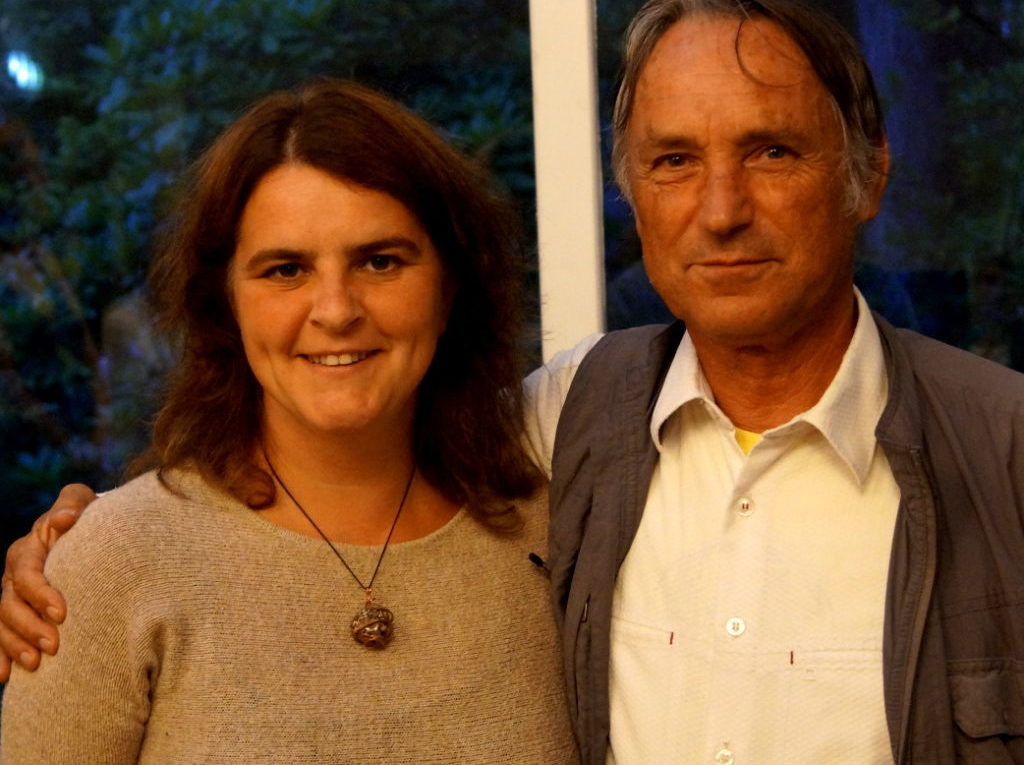 Pogacnik and the power points of Findhorn

Many people who visit the Findhorn Foundation in the north of Scotland experience a different energy. This energy of Gaias Chakras can be overwhelming for a lot of visitors. Geomant Marko Pogacnik explains in his lecture why these energies are so strong.

Monday august 22 2016 Pogacnik lectured about the different faces of Gaia, the Goddess of the earth, who has a body, just like humans. Gaia’s body can be divided into chakra’s. Pogacnik points out the chakra’s on European scale. The first chakra: the basic chakra concerning body, material matter and money starts in Greece. As you know this chakra is not so healthy because of the financial crisis, which also concerns the whole EU.

The second chakra is the emotional, sexual and womb-chakra. This is represented by the Balkan, where Marko Pogacnik is born (Slovenia). Maybe you remember the Balkan war in the nineties which affected the whole of Europe. It is the womb that had to be restored the last few decades, because here begins the network of life.

Pogacnik did not mention the third (self-worth, ego and self-knowledge) and fourth chakra (love and empathy). But I assume they should be somewhere in Austria, France and/or Germany.

The fifth chakra was recognized in the Netherlands, which represents knowledge and communication. In 2008 Pogacnik visited the Dutch city of Nijmegen, where I come from. He felt that Nijmegen is a special place where different earth and sea energies come together. You can read more about the Geomantische Kaart Nijmegen on the website.

Between the Scottish Edinburg and Inverness is the sixth chakra, the chakra of spirituality and the third eye. This explains why spirituality is so alive and vibrant in this area and particularly in Findhorn. And why the Findhorn Foundation has been for many years and still is the most popular and attractive spiritual community in Europe.

The 7th chakra, crown chakra is in Iceland. Here all the energies from under Europe’s surface are coming out through the biggest geyser, volcano and glacier of the world. Here Mother Nature expresses herself in superlative. In this place the continental plates are not pushing each other but they are drifting apart.

The area of the sixth chakra has different powerpoints where we as humans can cooperate with Gaia. Around the Cluny Hill College of the Findhorn Foundation in Foress are seven Hills. Their energies correspond with the seven closest heavenly bodies: sun, moon, mercury, venus, mars, Jupiter and Saturn. For instance directly behind the Cluny Hill building lays the venus hill. Which could explain why the energy in Cluny Hill is so loving, beautiful and feminine. The Venus Hill displays a spiral pass to the top, which transmits energy to the hollow between the hills. It is a classic connection between heaven and earth. Opposite of this hill lays the Mars Hill which harbors a war cemetery. Maybe that explains why the mars energy is not very well balanced. In fact the Foundation does attract far more women than men.

Gaia appears in roughly three stages: as the White Goddess, the innocent virgin; as the Red Goddess, the fertile mother and as the Black Goddess, the wise elderly woman or grandmother. She also shows these faces in the environment of Findhorn. We find the Black Goddess in the lagoon of the Findhorn Bay. Here the water of death (and transformation) represent the door of manifestation. Because in the 6th chakra at Cluny Hills it represents Gaia’s visionary creations between the planets. The Cluny Hills are in collaboration of the lagoon to store the visionary patterns in and around the Hollow of these hills. This is the memory of Gaia. Here the deva’s (which are the spirits of the plants) translate these energies into plant forms. This is also the place where the founders of the Findhorn Community started their spiritual work.

It is very important that more people become aware of the energies of Gaia and take better care of the planet. But we must not forget to also take the second chakra, the womb of Life into account. Creative force cannot go in there if there is no exchange among the other chakras. We can be spiritual, but we must never forget the other parts of our and Europe’s body and take care of our emotions, sexuality and physical needs.